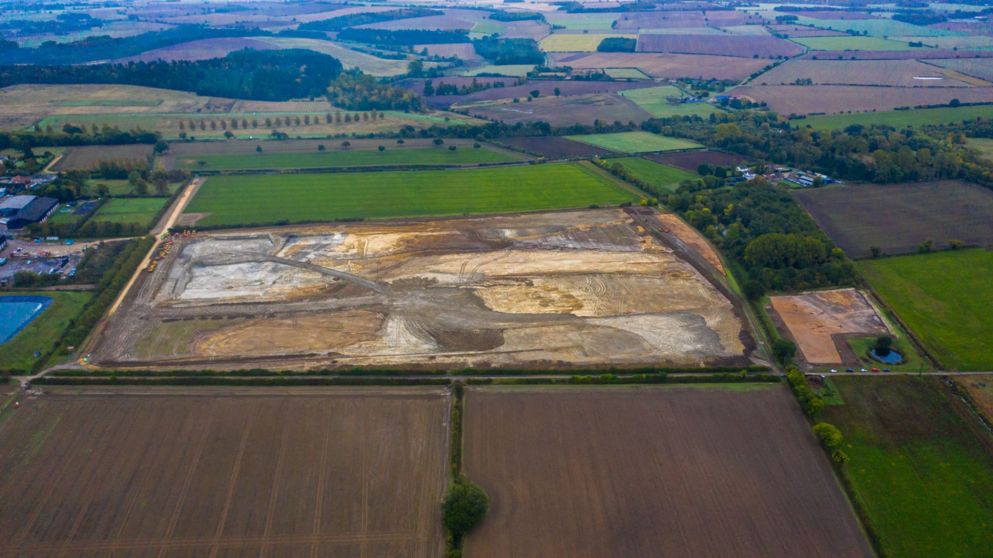 Even though BOM Group has quite a lot of experience in the UK market and is familiar with big greenhouses, the 29 hectare project that they are realizing currently in Norfolk - UK, is unique. Despite the Covid-19 crisis they are building (under the health regulations) full steam ahead to have the 29 hectares of greenhouses up and running by end of this year. 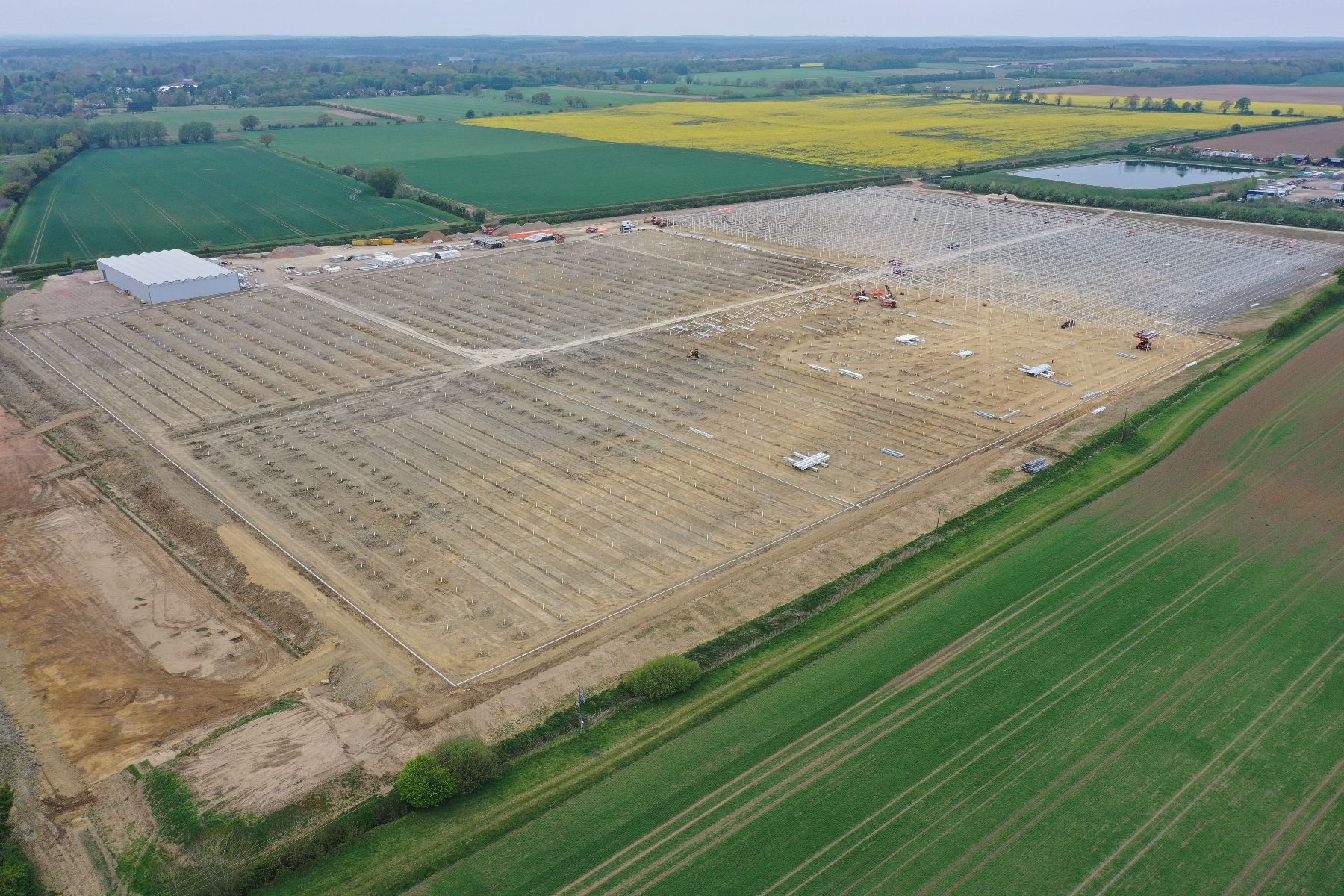 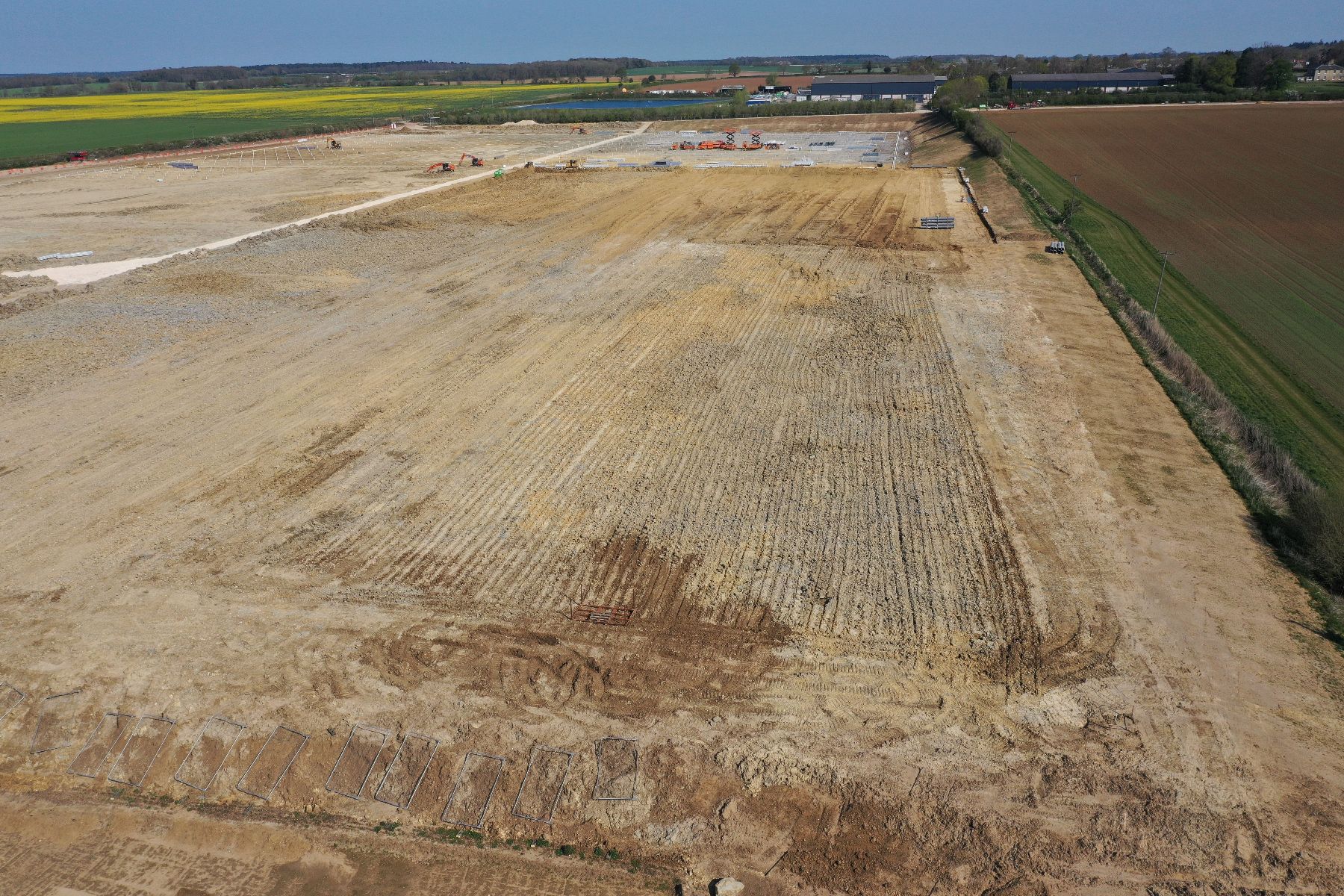 Local-for-local
The project puts emphasis on the local-for-local approach. The two locations will be sustainable ventures that produce vegetables for the local market. “One location in Bury St. Edmunds will be called Place Farm,” says Mike. “This will be a greenhouse of 12.7 hectares, and an English grower named Abbey View Produce will be using this facility. The other location in Norwich will be called Crown Point, which will be divided into two greenhouses of 7 and 9 hectares, this facility will be used by Dutch growers. Once completed these greenhouses will be able to provide the UK market with 10% of its yearly consumption of tomatoes and sweet peppers, produced locally.”

The greenhouses will be warmed using residual heat from a nearby wastewater project, and according to Mike Vermeij it’s the combination of technique and scale that makes it a one of a kind project. Next year, UK grower Abbey View Produce and the Dutch growers start growing tomatoes and sweet peppers in this new venture. 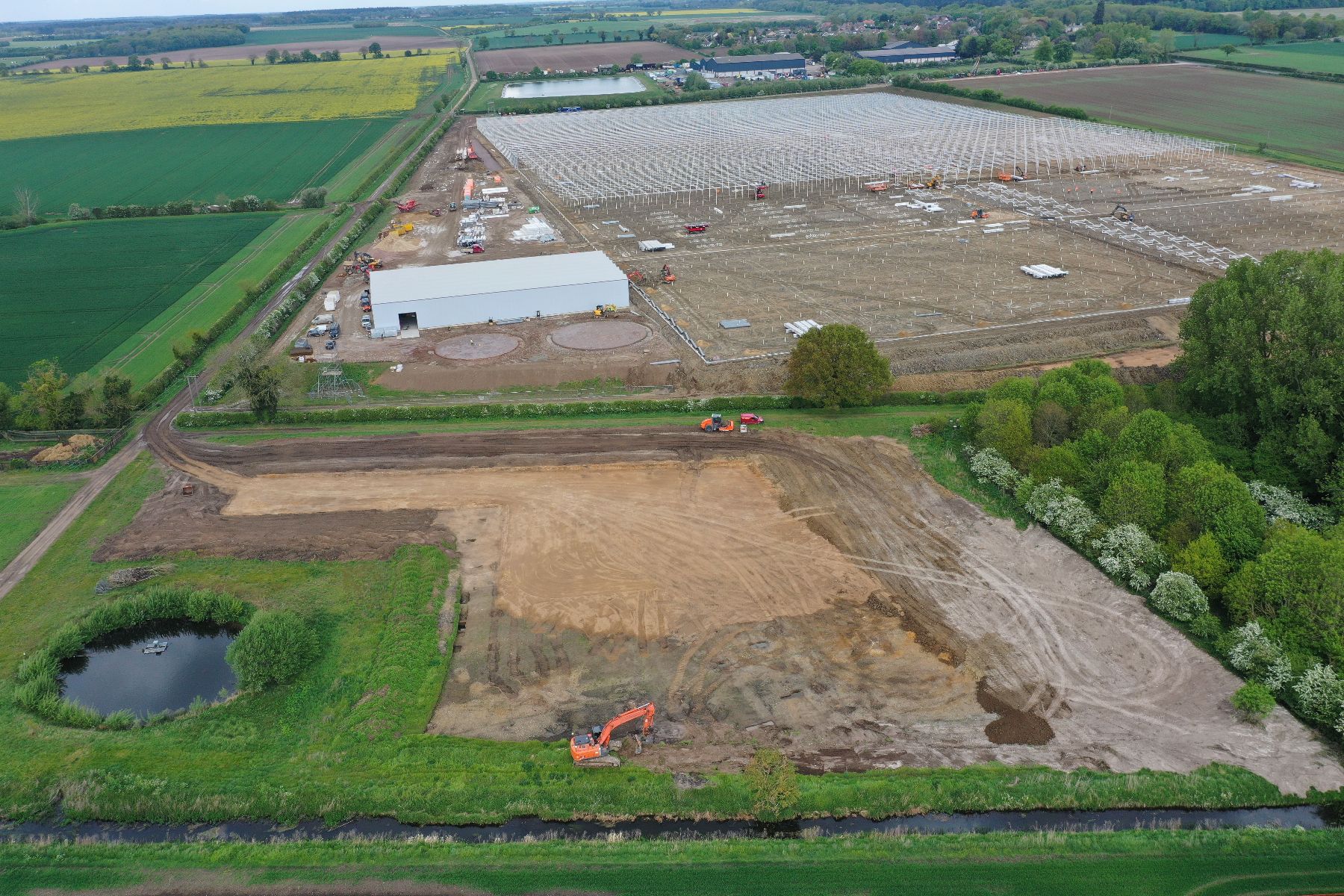 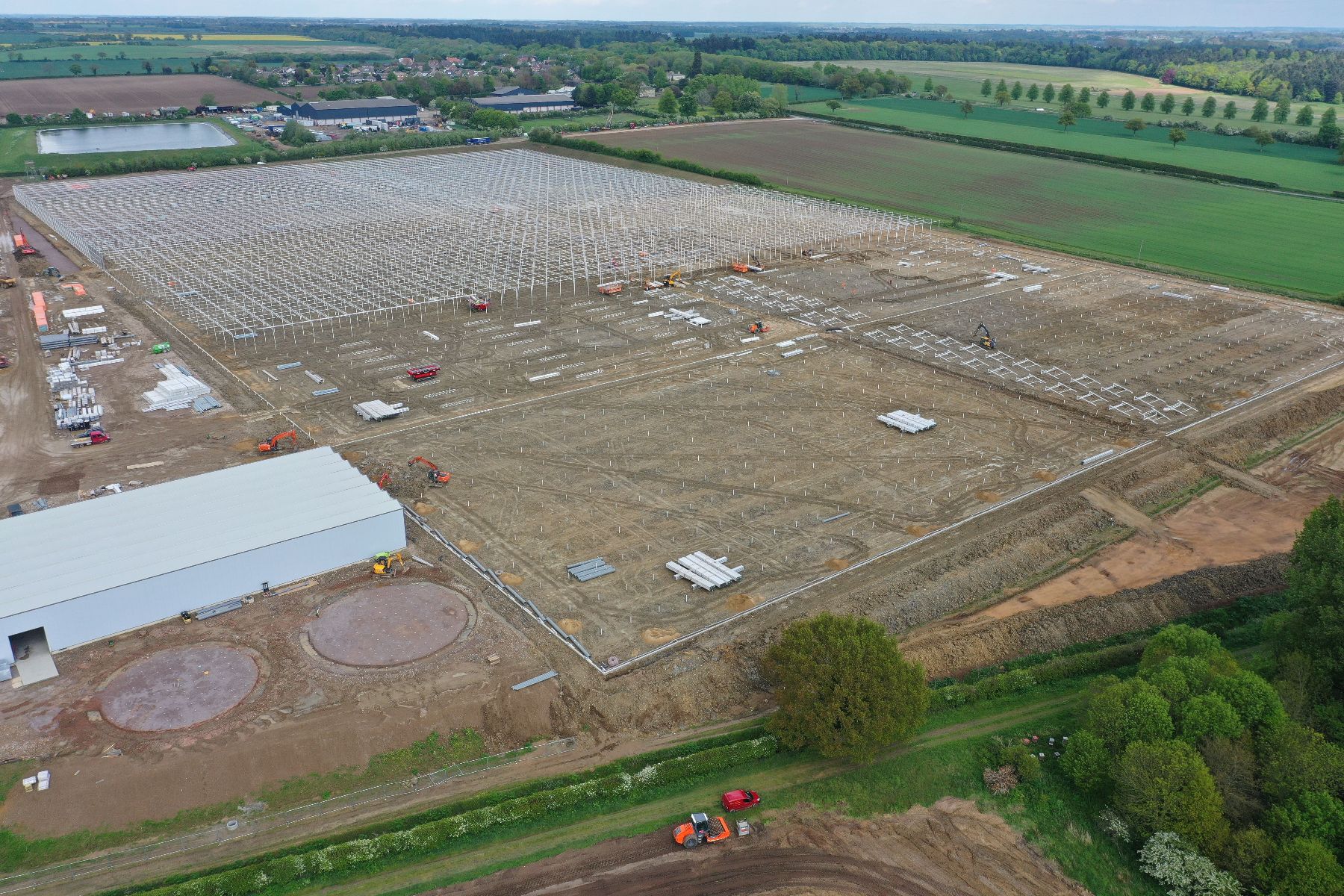 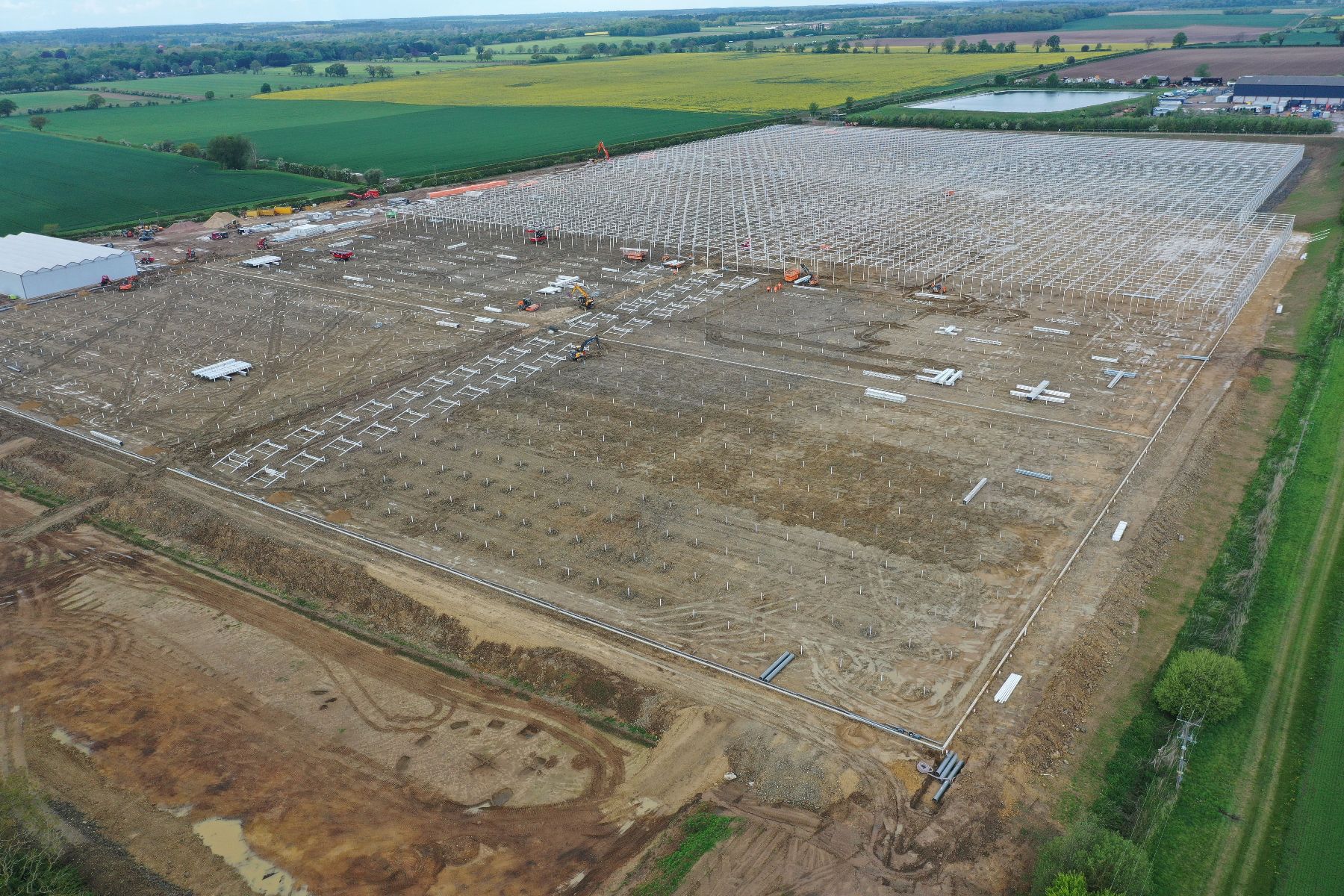 Sustainability
One of the most important reasons that this project came to be was the pursuit of sustainability. The overall client for the project, Low Carbon Farming Ltd., is a project development company that is focused on reduced carbon footprint. “They had worked out an interesting technology that would allow the greenhouses to be heated with the residual heat from a nearby wastewater project,” says Mike. “This was the foundation of the entire project. They approached us and we helped them make their vision a reality, by connecting them with growers and helping them with convincing the investors.” 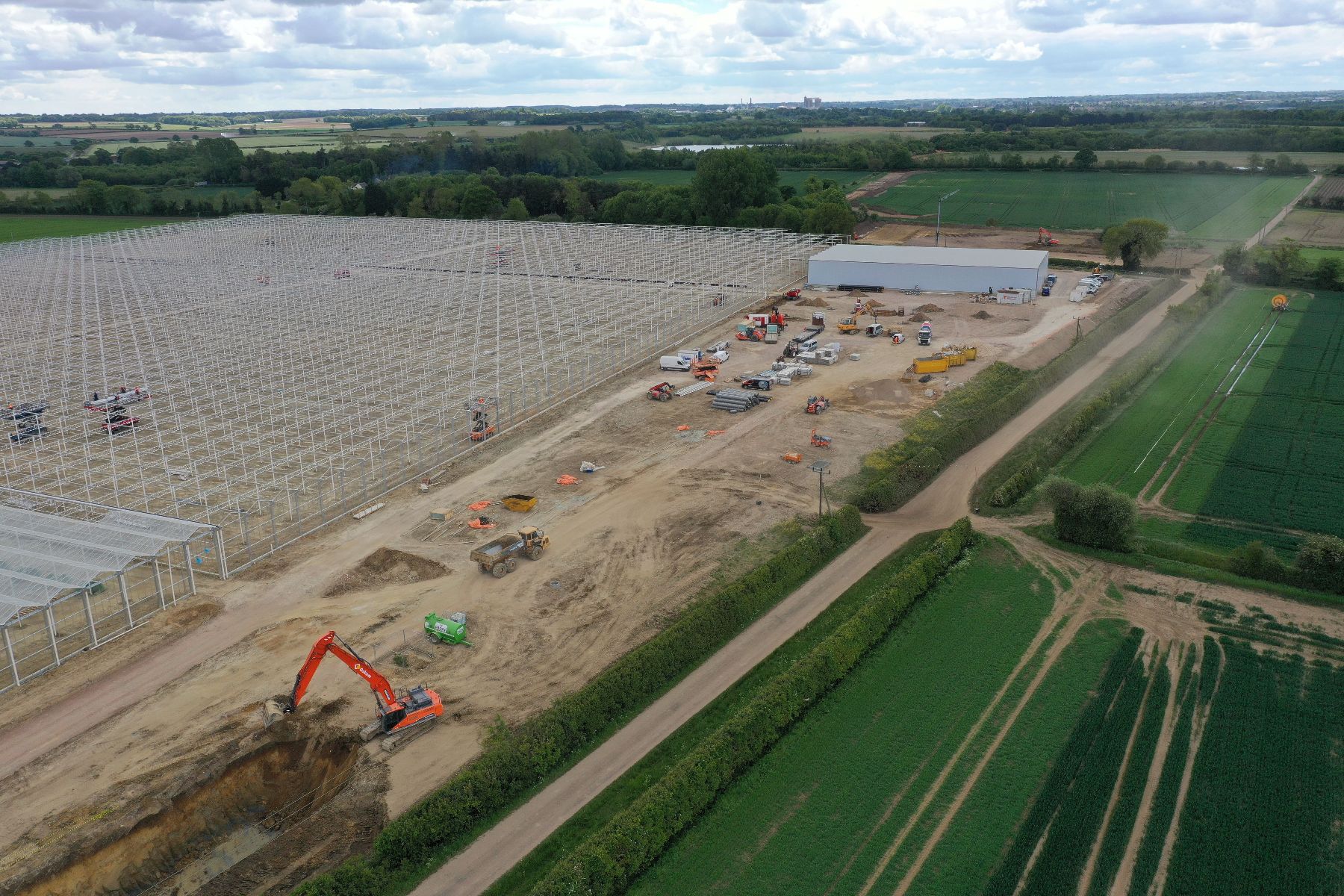 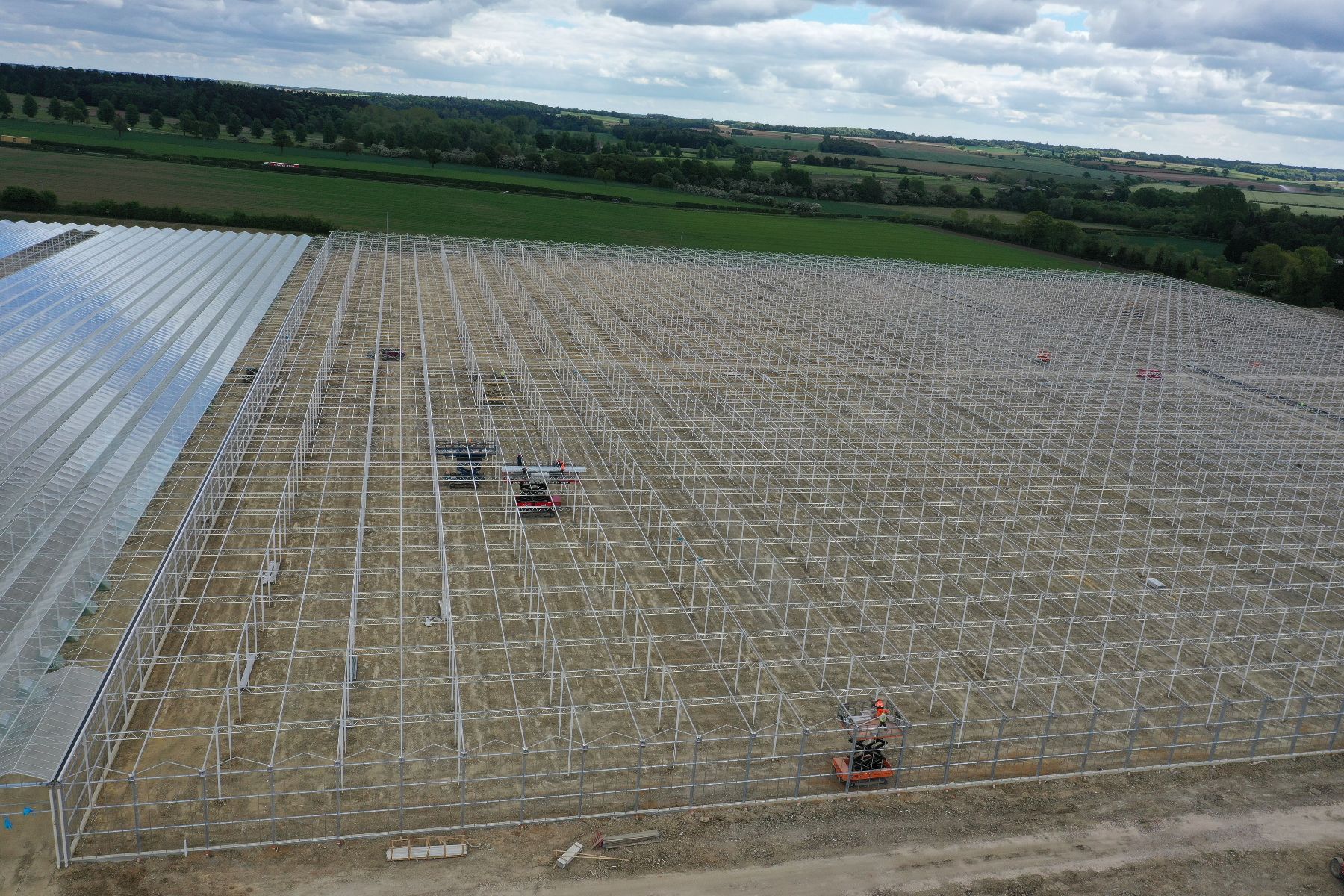 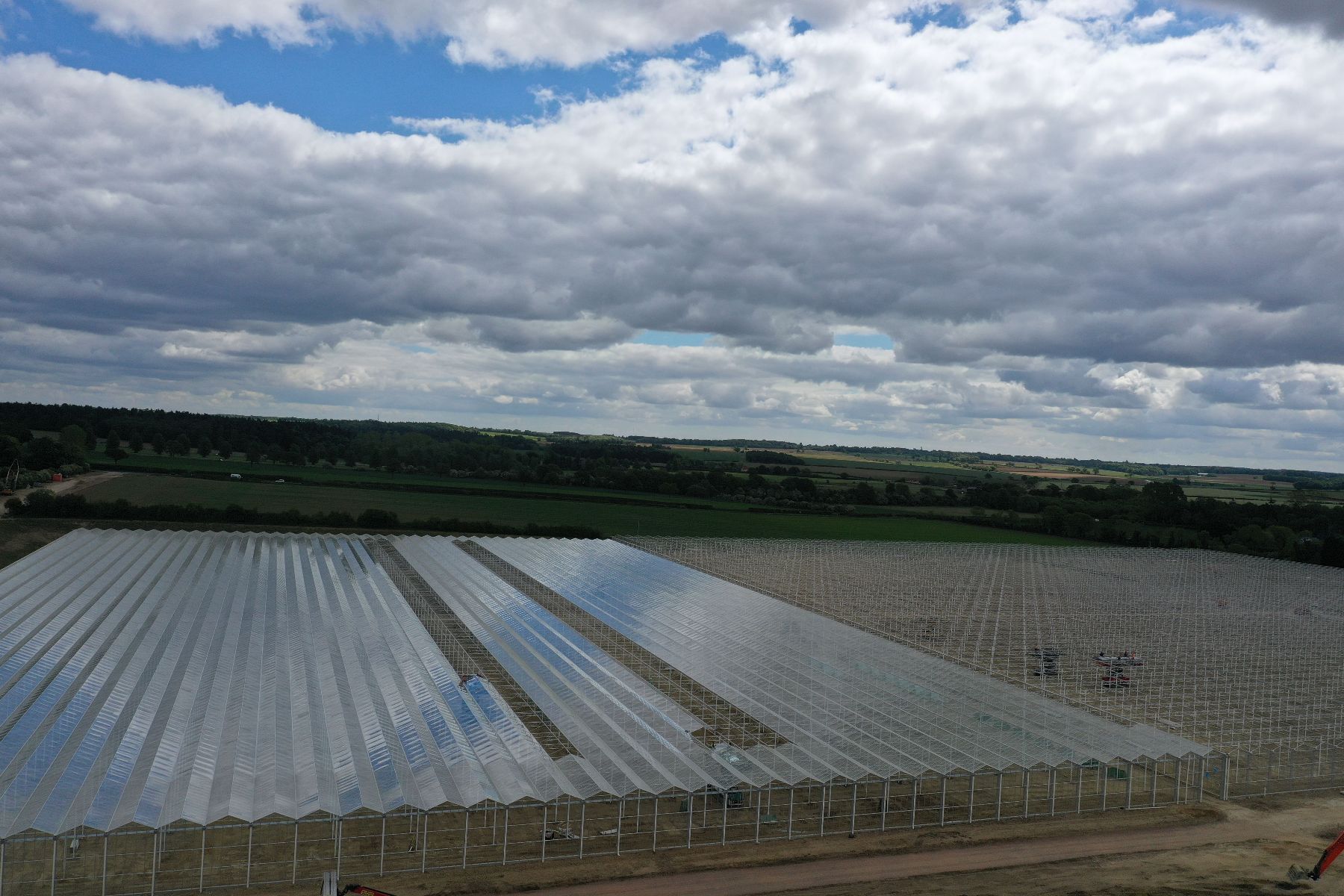 Water-to-water heat pump
So the primary producer of the energy used in the greenhouse will be the water-to-water heat pumps linked to the nearby wastewater project. “The water coming into the greenhouse through this system will be 50°C, and this will be used to keep the greenhouse at a steady temperature year-round,” says Mike. “It could potentially be a good example of what future installations will look like in the Netherlands after the energy transition. It will be a good example of the possibilities with these kinds of temperatures.”

BOM Group have worked on projects with water-to-water heat pumps with soil storage or with external heat or cold sources, but not at this scale, and not with this level of power. “The total power of all the heat pumps and the CHPs to run them combined will take care of all the energy needs of the greenhouse,” says Mike. “Of course we have back-up power and heating solutions prepared for extreme situations, but in essence the entire installation will run on these pumps. Not only is this quite a sizeable project for UK standards, but this is also the first of its kind when it comes to the energy supply – possibly even the first in Europe on this scale.” 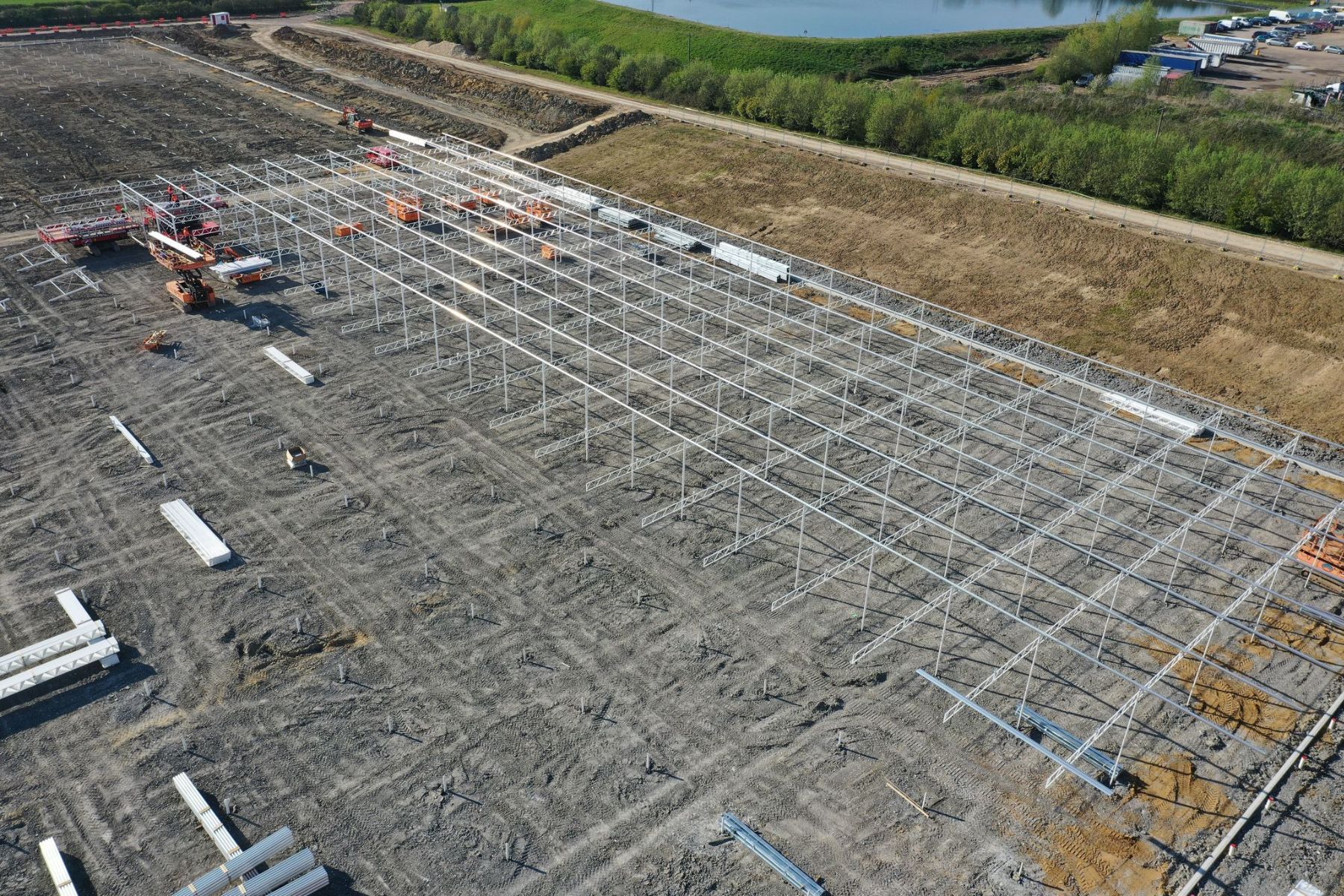 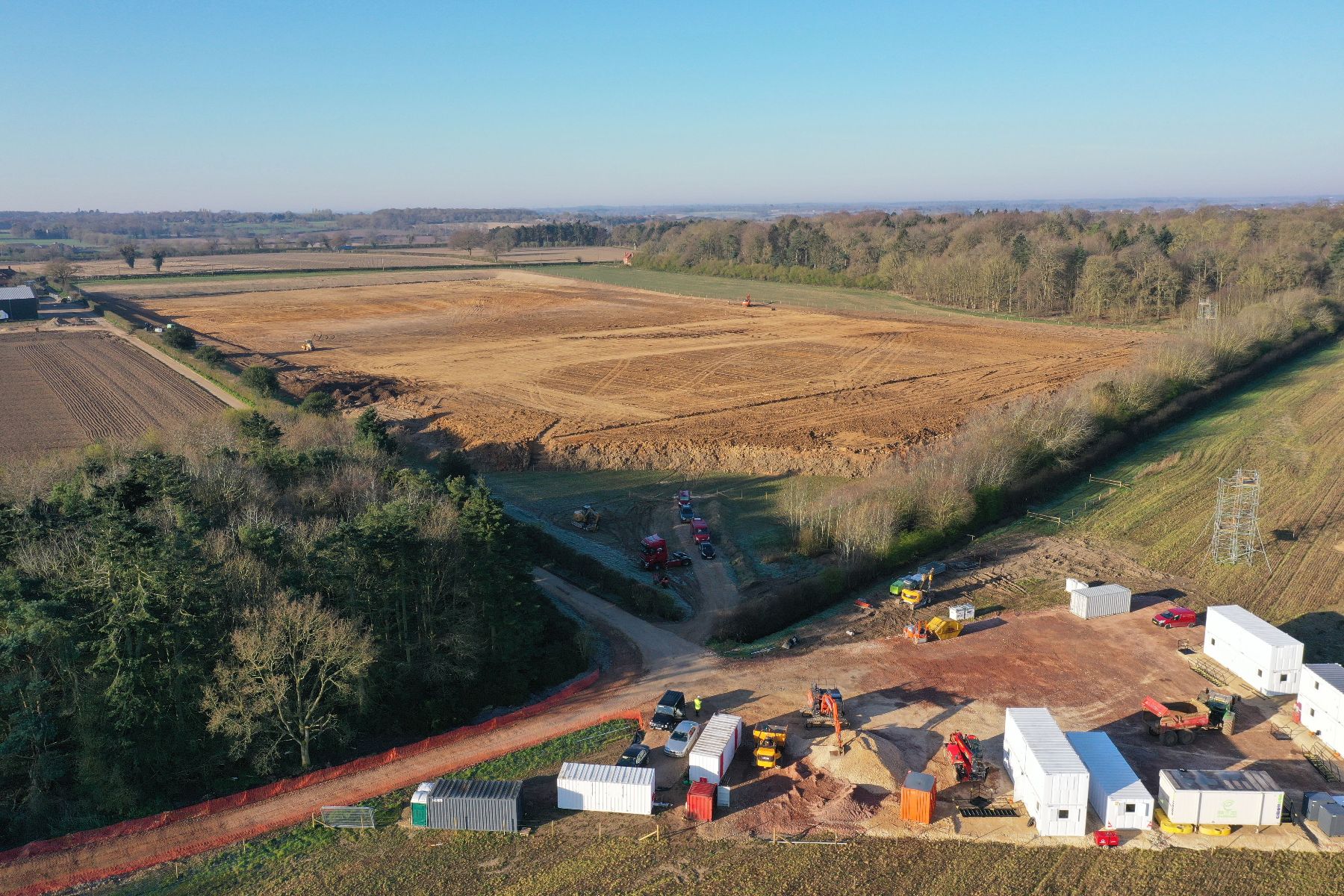 Brexit
Brexit is not primarily a concern for the project. According to Mike, Brexit played a major role in negotiations. “Brexit was actually a big reason to undertake this project,” he says. “Local production and independence from imported goods have become increasingly important because of it. But the risks surrounding Brexit did end up delaying the project a bit, and we ended up adding an extra clause to the contract, because nobody really knows the actual consequences of it. For now we have made good arrangements for a potential Brexit, and we are expecting that the eventual deal will not have an effect on the implementation of the project – and if that does turn out to be the case, then we are contractually prepared.”

A typical BOM project
For this project BOM Group, together with Low Carbon Farming Ltd., were able to bring together the growers and the investors. “This is something you see more often in today’s market, that people expect us to pull together the various elements of the project,” says Mike.

BOM Group were not only tasked with finding all the necessary parties to complete the project, but the project is also completely turnkey. This means that they are also responsible for delivering elements of the project outside of the greenhouses. “We have to level the ground, build the roads and the road connections, lampposts, parking spaces, charging stations for electric cars, bat friendly lighting, you name it,” Mike says. “All of this has been included into the plan that we have to carry out.”

A project of this size and complexity is a challenge for BOM Group, but Mike is convinced that only Dutch parties would be capable of actually completing a project like this. “We don’t expect any non-Dutch developers to be able to realize a project like this,” says Mike. “Because a lot has to happen on short notice, and the Dutch greenhouse builders are still ahead of the competition in other countries at this level.”